Major Miracle in the Midst of Major Tragedy 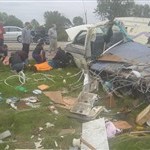 I have heard the question many times, “Can lightening strike in the same place twice?” Well in terms of the my family’s experiences with accidents, especially RV accidents, it did strike twice. First in 1996 and then again 10 years later. This accident with Sharna in 2006 was like lightening in a blue sky and was a horrible reminder to the emotional tragedy of the RV accident the whole family survived in West Palm Beach Florida in 1996.

We were traveling down the highway in two 40 foot buses and a 30 foot C-class RV, headed for a well earned holiday in Wisconsin Dells, after ministering in New York State. We stopped just short of reaching our destination because I decided that everyone should rest to make for a safe arrival the next day. We all woke up excited about the last part of the trip.

We set out to finish the trip and for the first time, I was trailing behind the others in case something went wrong. While sitting back in the 40 footer, I noticed an RV fish tailing just 6 vehicles in front. The shock hit my brain as I yelled out, “ That’s our RV!”

I watched helplessly as the RV and trailer swung from one side of the highway to the other: one, two, three times as other vehicles slammed on their brakes to avoid the RV. As I saw the RV come back towards the center of the highway, in split second,  it lifted off the ground, hit and rolled many times, imploding in front of my eyes. In shock all I could do is shout out “NOOOOOO!”

In a matter of split seconds the RV carrying my daughter Sharna and her boyfriend Kiegan imploded and spread debris approximately 60 yards along the highway.

As I jumped from the bus to the crash scene, I was shocked to see Kiegan stepping out of the broken mess that had been left 20 feet away from where the RV finally stopped rolling. I stood in shock and thought I was seeing the spirit coming to say good-bye. I looked down toward the bus and saw Sharna walking toward me holding her shoulder. In those split seconds,  I could not comprehend how anyone could walk out of that horrific accident. I thought they were just appearing to say “Sorry we messed up.” and then depart. But it was really them and in some miraculous way, they both escaped certain death and were walking toward me”. Thank you Jesus! You’ve done it again I thought as I rushed to the aid of the kids and got them on the ground while others arrived quickly to help. 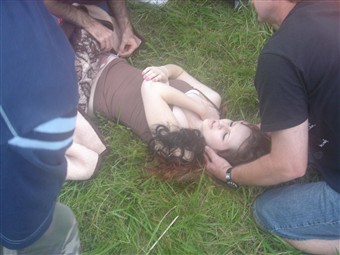 Here I was again, facing this horrific reality of another accident, knowing overwhelmingly that our Heavenly Father had rescued us again from certain death. As I held Sharna’s head, the realization hit me that she was going to be alright and that in my heart of hearts I knew that only God could have brought her through again.

I was amazed that within minutes of the accident, qualified paramedics were there with us to work on the broken bodies. Even a doctor with blue gloves appeared and helped and no one knows where he came from or where he went.

Miracle after miracle happened as we loaded the kids into the two ambulances. While at the hospital, Sharna was shocked and hurt but had the peace of mind to hold me and calmly say, “ Dad, isn’t God good? He allowed all my wounds and cuts to be where when I heal they will not be visible.  He knew Daniel could handle scars as a boy, but knew as a girl that I would worry about the scars.” She was an hour from the edge of death and rejoicing in the goodness of God!

I had been in an intensive care room with Sharna while Karen was with Kiegan in another. Karen returned to say that Kiegan had a broken neck. In shock I told Karen to stay with Sharna and I went down to the other room to hear the nurse telling Kiegan that the x-rays showed that his neck was broken and that he needed to not move. The next set of x-rays would determine how bad his neck was broken. As I stood their hearing this bad report, Kiegan’s eyes rolled over to me and said, “ Doug can you pray for me?” I said yes and moved right into lay hands on him. To my surprise the nurse put her hands on my shoulder and as I declared healing she said,” AMEN”.

Not long after that the guys came down and took him up for more x-rays. Later the puzzled doctors and nurses came returned and said, “This is really strange, but his neck is completely OK.” They immediately took the neck brace off and in only moments, Kiegan was out of bed and off to see how Sharna was doing. Another miracle had just taken place in the midst of the storm.

Both Sharna and Kiegan have fully recovered from that day. Sharna and my son Daniel (who watched the whole thing) both shared with me that they knew that God had protected them in the earlier RV accident, because we had told them the story so many times. But now they knew as young adults that God had delivered them once again from the hand of death and destruction.